So, I think at some point, most men (of the geeky variety) dream of having a home theater or screening room of some sort. Well, that was me as soon as we built our home almost a dozen years ago. We decided to finish out the upstairs for my office area with a bonus room and a large wall resulting with 120+ inches of available space magically appeared. I knew then what I wanted . . . of course, 12 years ago, to get a screen that big at any decent quality required a HUGE price tag.

Enter 2015 Christmas where I actually was able to save some of my Christmas gift money and decide to use on myself (yeah, one of those usually loses out!). I decided to do some quick reviewing and, based on many, MANY reviews, decided on the Epson Home Cinema 2040. So, here we go . . .

Quick list of what I’m using as inputs & outputs:

First off, I have never owned a projector. I’ve seen them at presentations, schools, etc. I remember one my church had growing up that projected a whopping 640×480 resolution. Blow that up on a wall and you could play a quick connect 4 game due to the abysmal resolution. Anyway, this projector is a nice 1920×1080 (Full HD), so we’re doing much better in that regard.

Setting up
Out of the box, this guy is very nice as far as size. It fits nicely on a back cabinet (approximately 13 ft from projection wall). Setup was a breeze – just power cord and HDMI from PS3 and powered in 30 seconds. I did take about 3-5 min to adjust the angles, but it wasn’t hard to align at all. NOTE: this projector does not have adjustment left to right for offset viewing, so you’ll need pretty much a dead center position from left to right. I did some research as to the size vs distance and this worked out perfectly.

First look – my advice on projector viewing and what to expect
I have been happily watching a Panasonic Plasma for the past 4 years or so. The blacks are amazing . . . the color is amazing. It’s pretty much as good as I’ve ever seen on a TV. So, my initial viewing of an image for this projector was actually pretty underwhelming. However, after an afternoon of video games and movie testing, I can say that this does look pretty great – the size greatly outweighs any loss of contrast. Bottom line, expect to “adjust” to the new picture if you’re used to any modern flat screen television. If you’re used to an old tv or just don’t care about that kind of stuff, you will love this projector.

A quick Nintendo Wii side note:
Kids love the giant screen . . . image is absolutely horrible since it’s not HD. Tennis fun outweighs the latter though.

Grain of salt . . . using wall.
My initial viewing today got better and better – even to the point where I’m likely going to keep the item. The fact that I’m using a beige wall right now adds to my good impression. If/when I keep it, I’ll hopefully follow some guidelines on painting the wall for much better contrast – or purchasing a screen.

So, pretty much, this is a great, awesome thing! It didn’t take a week or two for my kids (all three) to start hanging upstairs to view their Netflix and so forth on the giant screen. Movie night is so very awesome. Seriously, all members of the family enjoy being upstairs in the “cave” we’ve created. It’s a very nice escape.

White, White, WHITE!
OK, remember I said I used a beige painted wall. Well, I went with this tutorial (with much help from my wife – thanks!) and the change is unbelievable. I only needed a quart of the paint, FYI – 4 coats was needed though and well worth it. Here’s a shot of the before/after during the job with just one coat of paint. Each coat brought even more brightness and vividness. This is the point I was sold. 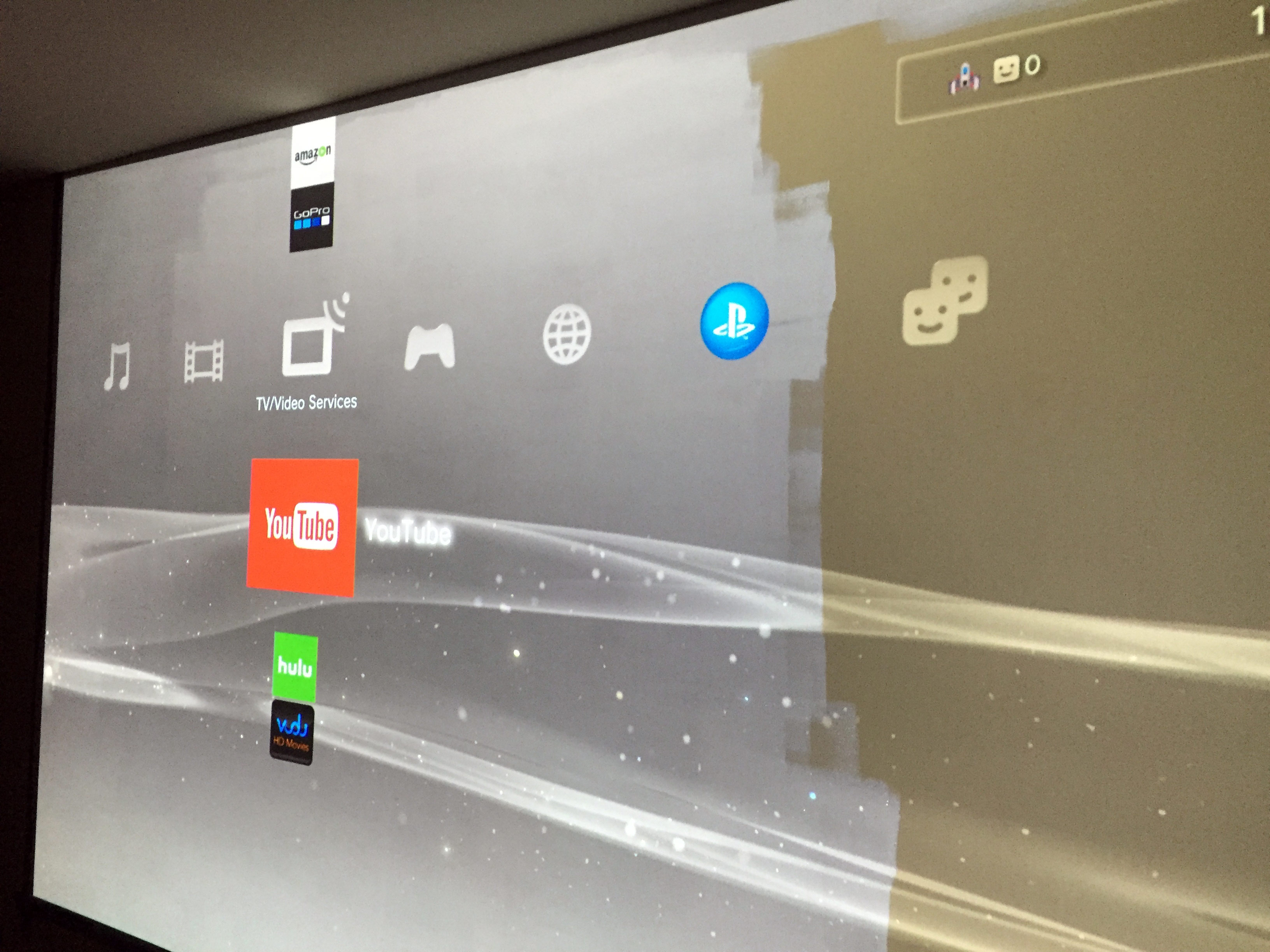 Likes at this time…

Dislikes at this time (minor ones)…

After almost 2 decades of dreaming of a large screen “man room” sized setup, the Epson 2040 has definitely delivered. I did have to take a small step backward in contrast, but the sharp detail and great color more than made up for the sacrifice. Oh, and there’s the amazing price (relatively speaking). I feel confident this will keep me satisfied for several years . . . you know, until 4K or 8K screens are main stream!